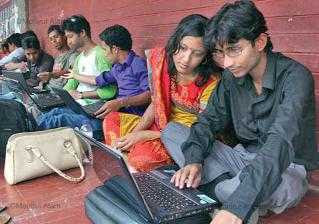 On 6 October 2008, Computer world.com published a survey report where it said, “Wi-Fi (Wireless Fidelity) helps college students to get better grades.” The research was conducted among 501 college students of the United States of America. Nearly 75% students said that Wi-Fi on the campus helps them to get better grades; 48% students said that they can even give up beer but not Wi-Fi. This was the condition of college students of USA back in 2008.
Now let us take a look at our university campuses. Shahjalal University of Science and Technology (SUST) is one of the most IT enabled universities in Bangladesh. It is the first university in Bangladesh providing the whole campus with free Wi-fi access for students and staffs. Bangladesh University of Engineering and Technology (BUET) have also provided free Wi-fi access.
University of Dhaka (DU) has also Wi-Fi facilities but the coverage is very limited. Among 17 halls only 2/3 offer this facility to the students; the ratio is same for the departments and faculties. The TSC of DU has a special Wi-Fi facility which is not connected to the central system. Recently, Jahangirnagar, Chittagong and Rajshahi University have got this facility for their students and teachers. Some private universities are also joining this trend of digitalising their campus.
‘Digital Campus is the first step towards a digital Bangladesh’. We all know and believe this. Nowadays Internet is so essential in our life that if a student is not familiar with this technology, he won’t be able to cope up with the pace of modern age. It is clear that Internet offers a great assistance to the students in their research, study and other regular activities.
In Bangladesh most of the universities are still quite far from the miracle of modern technology. Most of their activities are yet to be digitalised. They even failed to provide Internet facilities to their students. Many private universities don’t have computer laboratory or cyber zone at all. In spite of being at the centre of capital, DU has only two cyber centres, which can give access to only fifty students and they have to pay high for that service.
Last year in November, the European countries observed Internet week. On this occasion Skype (voice chatting website) had provided free Wi-Fi facilities to the entire Europe. In many countries this kind of Internet facility and connectivity is available for the entire cities. According to the Wikipedia until 2008, almost 300 metropolitan cities have offered this facility to their citizens.
Last year a survey conducted by BBC showed that general people think that to get Internet facility is their right. For Bangladesh this is still a far cry. If we look at the universities around the world, Wi-Fi facility is available in most of them. And this is not a recent phenomenon. In 1999, Carnegie Mellon University made history by first providing free Wi-Fi access to its Pittsburgh campus. In 2000, Drexel University of USA provided free Wi-Fi access to its entire campus.
A national daily earlier this January published a report about the present condition of Wi-Fi in Dhaka city. It mentioned that five star hotels, aristocrat restaurants and some airports have Wi-Fi zones. Corporate offices and even some luxurious residential flats have Wi-Fi access. It reached the conclusion that Internet facility is always available for a certain group of people in Bangladesh, but not for the students.
As I have mentioned at the beginning of this write-up, the US college students couldn’t think of a life without Wi-Fi in 2008. What about the condition of our students in 2011? It’s true that we developed the concept of Internet based activities or of digital campus only in recent years. And the improvement rate is very slow compared to other countries. The government should gear up its efforts towards digitalising the country, and for that to happen, it needs to attach due importance to the students first.