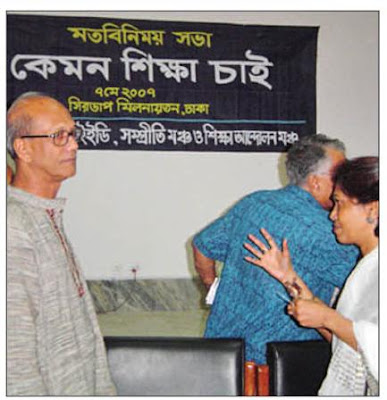 National Education policy 2010 was approved by the Cabinet on 31 May this year. Though five months have already passed since its approval we are yet to see any moves to implement it. According to a news report published on 24 September (Preface delays education policy) only the writing of a preface is delaying its gazette notification. The question is, does it take this long to write a preface? The report also said that the formulation committee formed on 28 June has not had any meeting to discuss the implementation process. Some other newspapers also published similar reports. We have bitter experiences with education policies. Before this report, eight education commissions/committees had been formed. From Qudrat-e-Khuda education report of 1974 to the Moniruzzaman Mia commission of 2004, recommendations were never implemented as an education policy. On an average every four to five years we got an education policy. When a new government ascends to power it forms a committee for a national education policy. It seems that our national education policy is a matter of politics, and only for political reasons not a single report has been of any use. All the reports are suffering from what maybe termed as `draft` disease.
From the very beginning this government started working on an education policy as it was an important issue in the Awami League’s election manifesto. They formed a committee headed by professor Kabir Chowdhury and it submitted the draft report within three months on 2 September of last year. The draft report was published on the website of the education ministry to get opinions from the people.
The government said that it would start its implementation process from January 2010. But the regrettable reality is, the implementation process is far behind the schedule.
A national education policy and its implementation is a lengthy process, and it needs time. But while it is delaying without any reasonable cause it worries us because it is a serious issue. If we look to the policy, approved by the cabinet meeting, we understand that some important things are missing from it. See the name “national education policy”, as the policy for our nation, simply it should define from the very first of the report, what kind of nation this policy want to build, after a long future where will the position of this nation be, with the competition of other nations how will we survive; how to prove us as a fit nation to this world? We don’t find the answer from the policy. There is no chapter written on ‘aim and objectives of the national education policy’ instead of this, the first chapter of the policy is‘aim and objectives of the education’.
However, as a nation we are not child, we are 39 years old as a nation from 1971. But a pathetic reality is that we have not a tangible education policy. So, we are lagging behind to compete with other countries. This is a hindrance to our development also. If we see to the world many nations have developed them within this time, and they proved in the world. It also true, we formed about nine policies but none was implemented. If this education policy can fulfill the demands of our society, we will be able to say that, we have also an education policy.
We understand, the government is very much in favour of this education policy, but because of the dilly dallying in implementation of the policy, question simply arises” What fate awaits the national education policy”. We know education policy is a serious matter, and that is why the government should take it seriously. Unreasonable delay is not desirable at all.